To share your memory on the wall of Carmella DiMeo, sign in using one of the following options:

Born in Saddle Brook, NJ, to the late Nunzio and Christina (D’Alessio) DeGondea, Carmella was a ... Read More
Carmella DeGondea DiMeo passed away on Thursday, March 28, 2019, in the Green Hill Assisted Living Facility, West Orange, NJ. She was 93.

Born in Saddle Brook, NJ, to the late Nunzio and Christina (D’Alessio) DeGondea, Carmella was a resident of Hasbrouck Heights, NJ; Lodi, NJ; and Dania Beach, FL, before moving to Doylestown, PA, in 2012. She moved to West Orange, NJ, six months ago.

Carmella received a Bachelor’s degree from Felician University and a Master’s degree from Fairleigh Dickinson University, completing part of her studies at Wroxton University in England. She was a Teacher of English at the Middle School in Hasbrouck Heights for 23 years, retiring in 1995. Carmella was a member of NJEA, NEA, NIAF (National Italian American Foundation) and Alpha Delta Kappa, and was active with the Felician College Alumni Association and the DeGondea family’s Mother/Daughter Club.

Carmella was also instrumental in bringing about the final bronze casting of Il Cavallo, Leonardo DaVinci’s design for an equestrian sculpture that had been interrupted for five centuries. Leonardo’s Horse was to be the largest horse sculpture ever made, but his preparations were destroyed when Milan was invaded in 1499. Five centuries later, a 24-foot horse based on Leonardo’s work was unveiled at Milan’s Hippodrome. Carmella took her husband, children and grandchildren to Italy for the unveiling and a most memorable vacation.

Carmella loved travel and encouraged this in her children and grandchildren as well, often inviting them along on cruises and vacations.

Carmella lived joyously, and radiated love. Her siblings and dozens of nieces and nephews called her Honey or Aunt Honey. All who knew her were blessed by her warmth and compassion, and she will be sorely missed.

A Celebration of Carmella's Life will be held at Ralph DiMeo's residence, 144 Ralston Avenue, South Orange, NJ 07079 on Saturday, May 11th.

A committal service will be held at Washington Crossing National Cemetery, 830 Highland Road, Newtown, PA 18940 on Friday, May 10th at 11:30 am.

In lieu of flowers, donations can be made in Carmella’s name to Felician University https://giving.felician.edu/donate

To send flowers to the family or plant a tree in memory of Carmella (DeGondea) DiMeo, please visit our Heartfelt Sympathies Store.

Receive notifications about information and event scheduling for Carmella

Donations are being accepted for: Felician University.

We encourage you to share your most beloved memories of Carmella here, so that the family and other loved ones can always see it. You can upload cherished photographs, or share your favorite stories, and can even comment on those shared by others.

Posted Apr 01, 2019 at 05:12am
My condolences to the family. Always remember that God cares for you and is “close to the broken-hearted.” May you call on Him in prayer for comfort and strength during this difficult time. Psalm 34: 18
Comment Share
Share via: 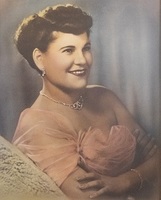