Obituary for Doris B. Whelan 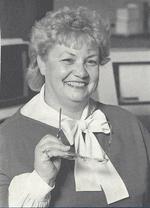 Doris B. Whelan of Kintnersville, PA passed away on Monday, February 3, 2020 in Neshaminy Manor, Warrington, PA. She was 80.

Born in Philadelphia, PA to the late Edward and Virginia (Warburton) Bergey, Doris resided in Churchville, PA before moving to Doylestown, PA two years ago.

She was formerly employed as an executive secretary with Rohm and Haas of Philadelphia, PA, retiring after 38 years of service. Doris was a member of Trinity Episcopal Church of Buckingham, enjoyed cooking and relaxing by the pool.

She was the beloved wife of 51 years to John W. Whelan; devoted mother of Marjorie Whelan and her husband Blair Walter, Brian Young, her daughter in law Susan Young and the late David Whelan; dear sister of Janet Cicalese and her late husband Michael, Edward Bergey and wife Donna; loving grandmother of Bryanna and Christian Young.