To share your memory on the wall of Elaine Gentle Good, sign in using one of the following options:

Provide comfort for the family by sending flowers or planting a tree in memory of Elaine Gentle Good.

Provide comfort for the family of Elaine Gentle Good with a meaningful gesture of sympathy.

Elaine was born in Rochester NY and in 1926 her pa... Read More
Elaine Good

Elaine was born in Rochester NY and in 1926 her parents moved to London, England and thus she grew up in her father’s home country. One of three sisters, she attended university for one year before WWII and its impact took her back to London to work. She fulfilled a number of roles during the war: care of the children of soldiers whose wives were also at work, briefly as a Land Girl and finally as a support staff member at an ear, nose and throat hospital. She had many stories to tell about the Blitz and the experience of coming of age in the 1939-1945 period which came together in a book she published in 2002 entitiled We Went to England.

After the war, Elaine came to America to be with her mother’s family back in Rochester. At a Christmas Party in 1946, she met Romer Franklin Good and they were married in September 1947. Romer was an engineer and was himself a WWII veteran. They lived on first one and then another small farm south of Rochester and there raised five children.

Elaine was widowed in 1978 and thus began the longest phase of her life. She immersed herself in the amateur acting community in Rochester – most notably, Blackfriars. She played major roles in productions like Sunday in the Park with George, Quilters, Into the Woods and Great Expectations. This passion was supported by her lifelong love of literature, her skill at artistic pursuits like sewing and painting and her deep respect for drama as a means of communication.

In addition to acting, she’d served on the Vestry of St. Paul’s Episcopal Church, on the Board of Directors for one of the first community childcare centers in the area and as a member of an important and influential Diocesan Committee which supported congregational development in the Episcopal Diocese of Rochester. She also worked for a time at B. F. Forman’s department store.

At the age of 80, Elaine left Rochester and came to Doylestown PA to be nearer her family. She again became involved first in acting and then with the Center for Learning in Retirement at Delaware Valley College. She served on the Board there until she was 94 and taught classes as varied as Literature (Jane Austen, Thackeray, Dickens); Acting and History (The Georges: Kings of England; Napoleon; The Tudors to name a few). She also was an active member of Trinity Church, Buckingham.

A Memorial Service will be held at Trinity Buckingham in May.

In lieu of flowers, donations may be made in her memory to Trinity Buckingham.

To send flowers to the family or plant a tree in memory of Elaine Gentle Good, please visit our Heartfelt Sympathies Store.
Read Less 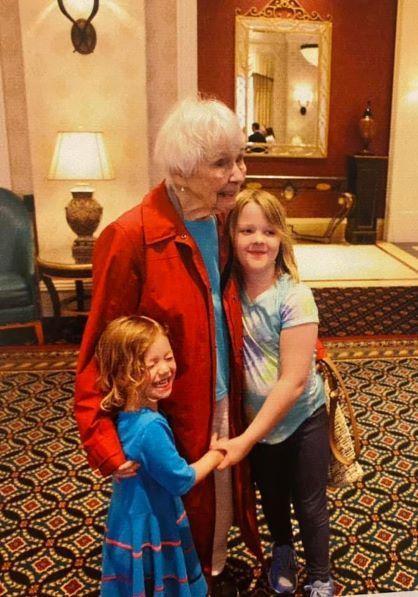 Donations are being accepted for: Trinity Episcopal Church.

We encourage you to share any memorable photos or stories about Elaine Gentle Good. All tributes placed on and purchased through this memorial website will remain on in perpetuity for generations.

Elaine presented something special in my life, from the time I met her in Langhorne Players' production of "Scotland Road" in 2006 (I wanted her role, but she got it!) to becoming neighbours in Doylestown. Her home became an oasis to me and I would pop over to share a cup of tea and long conversations about plays and theatre and mutual experiences. She was a wonderful teacher and raconteur, and was always surrounded by books with markers as she prepared her next lecture. However involved she was with theatre, though, the centre of her life was always Romer, even years after his death, and their family. She was grateful for her good fortune and never took anything for granted. I shall miss her terribly, but I have to be comforted by knowing that my dear Elaine is now with her beloved Romer.
Comment | Share Posted Mar 21, 2021 at 03:31pm via Condolence
TA

Playing with daughter Kitty at home on Schutt Road, Rochester, NY. She was a wonderful mother, wife and actress.
Comment | Share Posted Mar 19, 2021 at 08:35am via Condolence