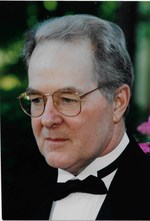 Tom Fitzpatrick was a serial enthusiast. His passions came and went, but never before he had shared them with those he loved. Birding, cars, wildlife and wildflowers, the Adirondacks, peonies, the Philadelphia Eagles, CB West Football, folk music, the history of WWII and the art of Andrew Wyeth were among his passions, along with his love for his devoted wife, Virginia, better known as Jinki.

Tom was born Francis Tompkins Fitzpatrick on the 23rd day of November 1937 to Florence Tompkins Fitzpatrick and Francis J. Fitzpatrick. He was raised in Scarsdale, New York along with his elder sister, Patricia Florence Fitzpatrick, and his younger brother, Philip J. Fitzpatrick. With Scarsdale High School’s Class of 55’ he participated in dramatics, and entertained as a folk singer, as well as professionally singing popular music with his best friend, Dick Crews. Tom had a lifelong love of songs and poetry, which he sang and recited for his family. Among his favorite poems were Fern Hill by Dylan Thomas and The Lake Isle of Innisfree by W. B. Yeats.

In Willingboro, New Jersey Tom joined a small pediatric medical practice. A few years later he created his own practice and became a beloved practitioner of pediatrics in Doylestown, PA. He was known as "Doctor Tom”. He worked alongside Jinki, a dedicated nurse who was his partner in work and life. The two married in 1984 and created a blended family with Shannon Gandee, Kenneth Fitzpatrick, Hilary Lo and Tara Leblanc, Tara Frisch, Todd Lower and Kathryn Dalton.

Tom and Jinki loved to entertain at their Court Street home in Doylestown, especially their festive Christmas Eve parties. In Tom's retirement the couple moved to a townhouse in Buckingham where they enjoyed wildlife, flowers and birds close at hand.

Tom's principal accomplishment was compassionately bettering the health of a great many of Doylestown's youngsters. He did this with the loving assistance of Jinki. Theirs was one of those rare relationships which functioned well both at work in close quarters and at home.

Tom is survived by his brother, his wife and children and seven grandchildren, Andrea Ray, Sarah Hickerson, Gabrielle Smertneck, Josephine and Clara Lo and Connor and Elizabeth Frisch.

No gifts are requested and private family services will be held at a later date.