To share your memory on the wall of Isobel Mansfield, sign in using one of the following options:

Provide comfort for the family of Isobel Mansfield with a meaningful gesture of sympathy.

Born in St. Stephen, New Brunswick, Canada to Dr. Andrew J. Manson and Alice Bell Manson, she was a 1949 graduate of Acadia University, Nova Scotia. Isobel worked for Sun Life Insurance Co. of Canada, Montreal; DuPont Co., Wilmington, Delaware; and, for many years alongside her husband as executive vice president of their consulting firm.

Isobel married Richard (Dick) G. Mansfield of Philadelphia in 1955 and enjoyed a long and happy marriage of 62 years before his passing in 2017. Isobel and Dick lived in Massachusetts, Connecticut, and Pennsylvania, and greatly enjoyed traveling the world together. Following these trips, Isobel would often give slide-show travelogue presentations to friends, sharing the fun and learning of their adventures. They enjoyed their Gourmet Dinner Group and Investment Club, and Isobel was also an avid bridge player. She enjoyed life and will be fondly remembered for her many stories of growing up in Canada, her positive attitude and spirit, and her encouragement of others.

In lieu of flowers, donations in Isobel’s name may be made to either the Benevolent Fund or Scholars Fund at Ann’s Choice, 30000 Ann's Choice Way, Warminster, PA, 18974.

A memorial service will be held at a future date.

Donations are being accepted for: Ann's Choice Benevolent Care Fund.

We encourage you to share your most beloved memories of Isobel here, so that the family and other loved ones can always see it. You can upload cherished photographs, or share your favorite stories, and can even comment on those shared by others.

Posted Apr 20, 2019 at 01:15pm
May you have comfort in the memories of your loved one. (2 Corinthians 1:2-4) The
Bible gives real hope of being reunited again with your loved one. It promises that
your loved one will soon come back to life in the resurrection to a beautiful, peaceful
paradise on the earth. (John 5:28, 29) 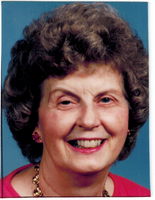