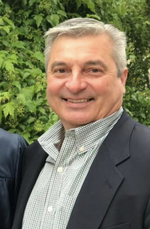 Aged 60, Larry Lunak, of Doylestown, PA peacefully passed away on Thursday, February 3, 2022 at his home. Known for his beaming smile, goofy dance moves, love of the Pittsburgh Steelers, inappropriate dad jokes and his infamous flannel-lined jeans from the pet store, Larry was a devoted Father, Grandfather, Son and Brother above all else. From flying kites and doing cartwheels with his granddaughter, to flying home from a business trip for a few hours to make his daughter’s college graduation, teaching his children to drive on the narrow, windy Bucks County roads, playing sports with his children, cooking his favorite Food Network dish and filling his house with family, food and laughter, Larry was one of a kind. He was a proud family man, businessman, friend, golfer, hunter, fisherman, provider, protector and advisor. There was no situation that Larry did not approach with a solution, calm head and open arms, regardless of how much his children tested his patience, especially his youngest daughter, Hannah.

Larry was born on August 10, 1961 in Sewickly, PA. Larry graduated from Carnegie Mellon University with a Bachelor’s Degree in Chemical Engineering and received his MBA from the University of Pittsburgh, Katz School of Business. Larry had a passion for helping others and devoted his career to Oncology research, education and marketing. Larry also formerly served as a Volunteer Firefighter with the Lingohocken Fire Company in Wycombe, PA with his son, Evan.

In honor of Larry’s love for all of the family dogs, memorial gifts to the ASPCA can be sent via www.aspca.org in lieu of flowers.