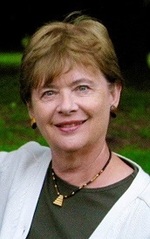 Margaret Neuman Granzow, age 79, of Carversville, Pennsylvania passed away on December 11, 2019. Margaret (‘Mitsy’ as she preferred) was born on September 22, 1940 to Milton Neuman and Helen (née Kapantais) Neuman, in Oak Park, Illinois. She was the second of four children. Mitsy’s early years strongly influenced her entire life by leading to loving and lasting bonds with her family and friends.

Girl Scouts played an important part in Mitsy’s early life. Developing friendships and learning the outdoor life led to her passion for nature and gardening. Helping her father with his prize hybrid tea rose garden inspired her to honor him by planting roses in the gardens at the many places she lived over the years.

Oak Park Elementary School afforded the opportunity to play the French horn which she continued to do in the high school orchestra. Summers were filled with family get-togethers, tennis, and cookouts. After Sunday church, Father, Mother, Mitsy and her brother, Skip, walked to the neighborhood park for a game of tennis. Mitsy excelled at tennis, played on her high school girls’ team, and was an active player for life. She so much enjoyed the friendships and competition.

Mitsy learned cooking and sewing at the side of her mother and Greek grandmother. This lead to a special bond with her mother and grandmother and years of holiday memories. Mitsy graduated from Oak Park High School in 1958 after which she attended Valparaiso University after which she married her high school sweetheart Gary W. Granzow and gave birth to sons, Russell, Andrew and Will. In 1974, the family moved to London, England. The early years in London left Gary and Mitsy with a strong affection for England and many cherished memories.

Upon return to the U.S. the family lived in Lake Bluff, Decatur and finally Lake Forest, Illinois. Mitsy was a Master Gardener and launched a career as a talented garden designer which she continue when Mitsy and Gary retired in 1997 to life in Carversville, Pennsylvania and Donhead St. Andrew, Wiltshire, England. The friendships she made in The Donheads and the lasting friendships in Carversville meant the world to her. She had a love for art, gardening, cooking, travel and church. For more than a decade Mitsy spent time as an active member of the Carversville United Church of Christ, leading its open and affirming (ONA) designation, aided others as a Stephen Minister, and volunteered with the Central Bucks Art Goes to School program. The people she met through these activities greatly enriched her life and she touched many lives through her acts of charity.

Mitsy is predeceased by her mother and father, husband Gary and her granddaughter Caroline. She is survived by her three sons, Russ, Andrew, and Will, daughters-in-law, Catherine and Caryn, as well as, five grandchildren, Benjamin, Timothy, Elise, Ryan and Emma. Mitsy is also survived by her older sister, Jeanne, and her two brothers Robert and Milt Jr. (Skip). Mitsy was a loving wife, mother, grandmother, and friend to many. We will miss her dearly.

The Carversville United Church of Christ, 3736 Aquetong Road, Carversville, PA will hold a funeral service on December 21st 2019 beginning with visitation at 10:30 am, a service at 11am with burial to follow.