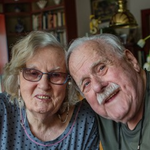 Otto Robert Bade, 97, of Doylestown, passed away peafully in his sleep on June 15. He was surrounded by his neighbors, who were at his bedside. His beloved wife of 73 years, Dae, proceeded him in death a year ago. Otto grew up on a farm in Nebraska, one of seven children. He was destined to be a farmer, but a trip to New York in 1940 to changed his life. He was employed with a jeweler named Frank Rebajes who was hoping to increase production. Otto was successful and, eventually, took over the business and taught himself to be a master silversmith, creating stunning original sterling silver jewelry.

It was in an elevator in New York that he met Dae Clements. They were soon married and were never apart except when Otto went abroad to serve in World War II where he served in the Phillipines. He wasn’t drafted but volunteered “because it was my duty to serve my country.” It was in 1981, that Otto and Dae moved to New Hope, where he opened ORB Jewelers on Main Street in New Hope. He was named Businessman of the Year several times. After Otto retired, he and Dae sold antiques from their Doylestown farm, where they renovated a farmhouse from the 1700’s. They also enjoyed gardening and raised farm animals.

He is survived by a sister Etta, a brother Bill, several nieces and nephews. He will be especially missed by his niece Victoria, a great niece, Jaclyn and a great,great niece Milania, and many loving friends.

In memory of Otto, donations may be made to Bucks County SPCA, PO Box 277, Lahaska, PA 18931 or www.bcspa.org would be appreciated.