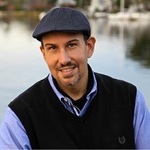 Peter S. Yaroma IV of Downingtown, PA, passed away on Sunday, December 2, 2018 surrounded by love ones. He was 45. He lived each day as if it was his last yet also believing he had a million tomorrows.

“Pete” had a voice. Sometimes when he was driving, he would break out into song. Elvis was his favorite, “Love me Tender,” and he would sing each note with the same enthusiasm and love he brought to life. “He loved music,” says his fiancé Erin Short, “And he had a beautiful singing voice.”

He also used that voice to yell at the TV at least once a day, while playing NFL Madden with his cousin Phil. And then there was his laughter – both memorable and contagious. Everyone around him would belly roll, sometimes just because he was laughing.

Pete, a C.B East graduate ('92), was an avid Chicago Bears fan, prolific artist, dog lover and traveler. Charming and gregarious, and always the snappy dresser, he was a lifelong friend to many. After a lifetime battle with hemophilia, which he braved with tremendous strength, humor and grace, his body was unable to continue fighting,

He is survived by his beloved fiancé Erin Short of Downingtown, PA, his mother and step father Karen and Joseph Persico of Warwick, New York, his step mother Eija Yaroma and younger brothers Brandon and Justin of Doylestown, PA, his loving grandmother (Nan) Blanca Zaboly and Uncles Gary and Raymond Zaboly of Riverdale, NY, and Uncle Steven and Aunt Judy Yaroma from Florida. He is preceded in death by his father Peter Yaroma III, and his younger brother Kristian Yaroma of Doylestown along with his grandfather Alexander (gramp) Zaboly of Riverdale. Pete and his cousin Phil (Kara) Yaroma of Warrington, PA grew up together and were lifelong best friends.